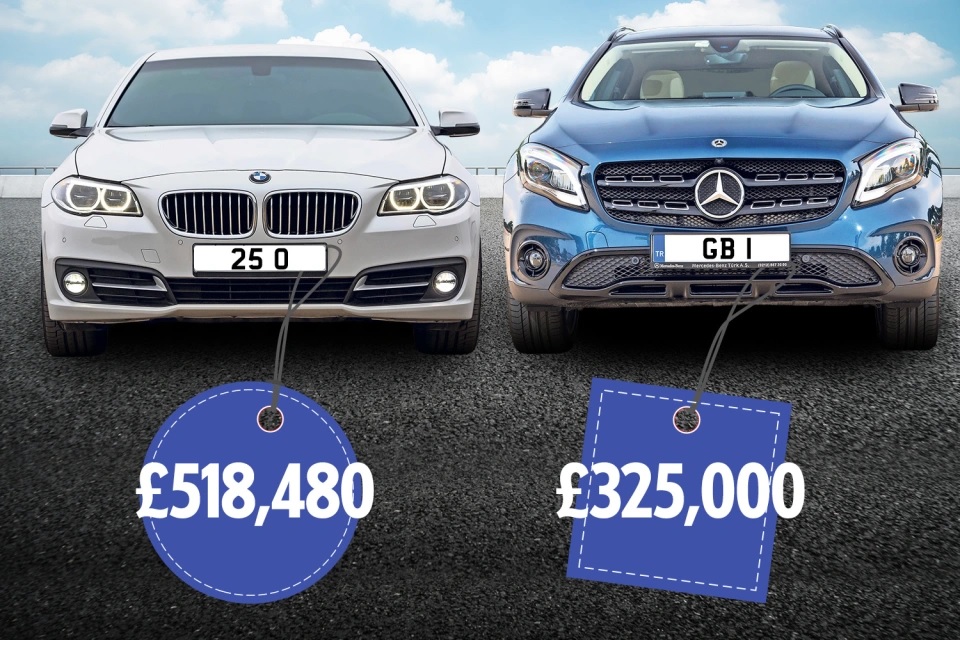 The more lucrative a number plate, the more people want to get their hands on it.

Some avid collectors look out for the rarest plates of them all which include the first registrations to be issued and those from classic cars.

The number plate may be personal to the driver, which doesn't always mean it comes at a good price.

But which are the most expensive to be sold to date in the UK?

What are the most expensive private number plates in the UK?

The most expensive license plate to be sold in the UK is simply 25 0.

The owner is an avid fan of Ferrari’s, and it was predicted that he brought the licence plate to go on his Ferrari 250 GT SWB.

The second licence plate to cost over half a million on this list is X 1.

The plate sold for exactly half a million in an auction in 2011.

The owner was never revealed but it's a wonder if they are a fan of action show G.I.Joe.

The licence plate is one of the oldest around, first made in 1925.

The owner may not be driving around in an F1 cars but will still feel like a driver with this special licence plate.

The first ever licence plate to be issued in Scotland was the S 1.

No, this licence plate isn't owned by one of the members of One Direction.

The plate was won at auction by a Lebanese property developer as a present for his wife, in 2009.

Currently, no vehicle details can be found for this licence plate.

This licence plate was sold at the iconic Bonhams' Goodwood Festival of Speed sale of sports in 2006.

The M 1 was the first licence plate to be registered in Cheshire in 1903, making it one of the oldest around.

It was purchased by a private buyer and now sits on a Rolls-Royce Phantom.

At the end of 2021 the registrations K 1 was sold for an undisclosed figure, it was owned by a good friend of Right Reg and now sits on a Rolls Royce in London. If the price is ever disclosed publicly it will be at position 1.